As we all expected, Dylan Sikura signed a two-year entry-level contract (ELC) with the Chicago Blackhawks on Sunday. Sikura will report to the NHL club immediately and will wear number 95 when he makes his NHL debut, likely on Thursday against Winnipeg. The Blackhawks originally drafted Sikura in the 6th round of the 2014 NHL Draft, with the 178th overall pick. By playing Thursday, Sikura will burn a year of his ELC, allowing him to enter restricted free agency after the 2018-2019 season.

Dylan Sikura is a poster child for the benefits of playing college hockey. When he arrived on campus in 2014, he was heralded as an offensive dynamo, coming in after totaling over 100 career points in the Ontario Junior Hockey League, and coming off of a 68 point campaign. Coach Madigan said that Sikura could compete for top six minutes immediately, and would be looked to help compliment Kevin Roy and the other Huskies’ forward corps to pile on goals. His first goal would be a powerplay strike against UMass-Lowell, a harbinger of things to come for the talented Canadian. However, Sikura struggled in his first season at Northeastern. A scrawny, skinny kid that was maybe 155 pounds with the scale fudged a little bit, he struggled against older, stronger, more seasoned competition. This resulted in periods of being a healthy scratch, but he eventually earned his starting spot back by the beginning of February, and ended his season with four goals in his final ten games.

Sikura returned to Northeastern each subsequent year, and improved each year under the watchful eye of Coach Madigan, Coach Keefe, Coach Smith, and the excellent strength and conditioning program established by Dan Boothby. As a sophomore, he quadrupled his point total to 28 points (10 goals), and was a fixture on the Huskies’ 7-8-9 line with Adam Gaudette and Mike McMurtry. Together, these three helped create a vaunted second line to compliment the Huskies’ first line of Stevens/Stevens/Aston-Reese, and the team took their fans on a magical run that saw them vault from the depths of a 1-11-2 start to a second half run culminating with a Hockey East Championship. Sikura’s contributions were all across the box scores in that playoff run, tallying one goal and four assists in the final three games.

As a junior, Sikura emerged as one of the premier players in college hockey. Setting a new career-high with 57 points (21 goals), he was nominated for the Hobey Baker Award for the first time in his collegiate career. At the time, his 57 points was tied for the 12th-best season in Northeastern single-season history, and his 36 assists were the most by a Husky since Mike Taylor in 1993-94. Sikura’s scoring talents were on display nearly every weekend; there were only 8 games out of the 38 he played where he did not register a single point. He became the latest Husky to have both a regular hat trick (after scoring thrice against Minnesota in November) and a natural hat trick when he score three times in the final 13 minutes of the game against UMass-Lowell to erase a two-goal deficit and give the Huskies the victory. He was named to the Hockey East Second All Star Team, as well as being named National Player of the Month for January. There were fears that Sikura would sign early after this season, but he made the decision to come back to pursue his degree and settle what he called “unfinished business.”

Returning for his senior season, Sikura would be voted assistant captain by his teammates, and have success both stateside as well as on the international level. In 35 games as a senior, he racked up 54 points; set a new career high in goals with 22; led the nation in powerplay goals (14); finished second in the nation in points per game (1.54, only behind Gaudette); and finished 5th in assists (32). There were only six games this season that he played where Sikura did not factor into the box score, continuing his scoring ways from a year prior. Dylan became the 50th player in program history to reach 100 career points on October 20th against Quinnipiac, and notched his 50th career goal against Boston College in the Beanpot Semifinal on February 5th. For a player whose commitment to Northeastern was influenced by the mystique of the Beanpot, it was fitting that Sikura’s final run in the tournament would be one of his best, assisting on two goals against Boston University to help lead Northeastern to their first Beanpot victory since 1988. Outside of Northeastern, Sikura had the opportunity to represent his native Canada in the Spengler Cup in December, chipping in one assist in four games as Canada won the Cup for the 15th time in their history. Ultimately, Dylan’s Northeastern career would come to an end in the NCAA Tournament, but it is fitting that one of the most prolific scorers in program history would end his career on a four-game points streak, with goals in all four games. He finished with 146 points, 14th-most in program history

Dylan Sikura is the quintessential college hockey player. Someone who leaves his university stronger, better, and more mature than when he arrived. Someone who worked past the initial hurdles he encountered to ultimately become better as a result of them. Someone who put everything he had into the program, leaving the program in a better state than when he arrived on campus. Someone who put off his dreams of professional hockey to accomplish the goals he set out at his current stage, goals he wanted to achieve with his teammates and coaches who had become his family.

I’ve had the privilege of knowing Dylan since he arrived in 2014 when I led the Northeastern student section. The Dylan I met then is the same Dylan that will graduate in May. He has stayed humble, motivated to get better every day, always the first one to crack a joke, and having a smile that can brighten anyone’s day, no matter the result of the game or what happened before he saw you. If Dylan ever reads this, I hope he understands the impact he has had on people like me; people who are fans of the program, but also are fans of the players and the men that these players become. The kinds of players that will sit and talk for a couple minutes after the game, or share a pitcher at Punter’s Pub talking about the season and whatever comes up in conversation. The college hockey world, and the world as a whole, needs more people like Dylan Sikura. Northeastern hockey and Northeastern University are better places because Dylan Sikura chose to come here.

When I bring my children to Northeastern games in the future, I’m going to tell them about the 2016 Hockey East Champions and the 2018 Beanpot Champions. I’m going to tell them about Dylan Sikura. About how he was a wizard with the puck on his stick, how he could weave through an entire defense and carve up a goalie with breathtaking ease. About the pinpoint passing, the deadly accurate shot. Dylan Sikura played his way into the Northeastern record books and into our hearts. Wherever his path takes him, starting this week in Chicago, he will have a legion of fans supporting him from Huntington Avenue.

The saying goes “Heroes get remembered, but legends never die.” Dylan Sikura certainly has earned his status as a Northeastern legend. Thanks for the memories #9. We can’t wait to watch you at the next level. 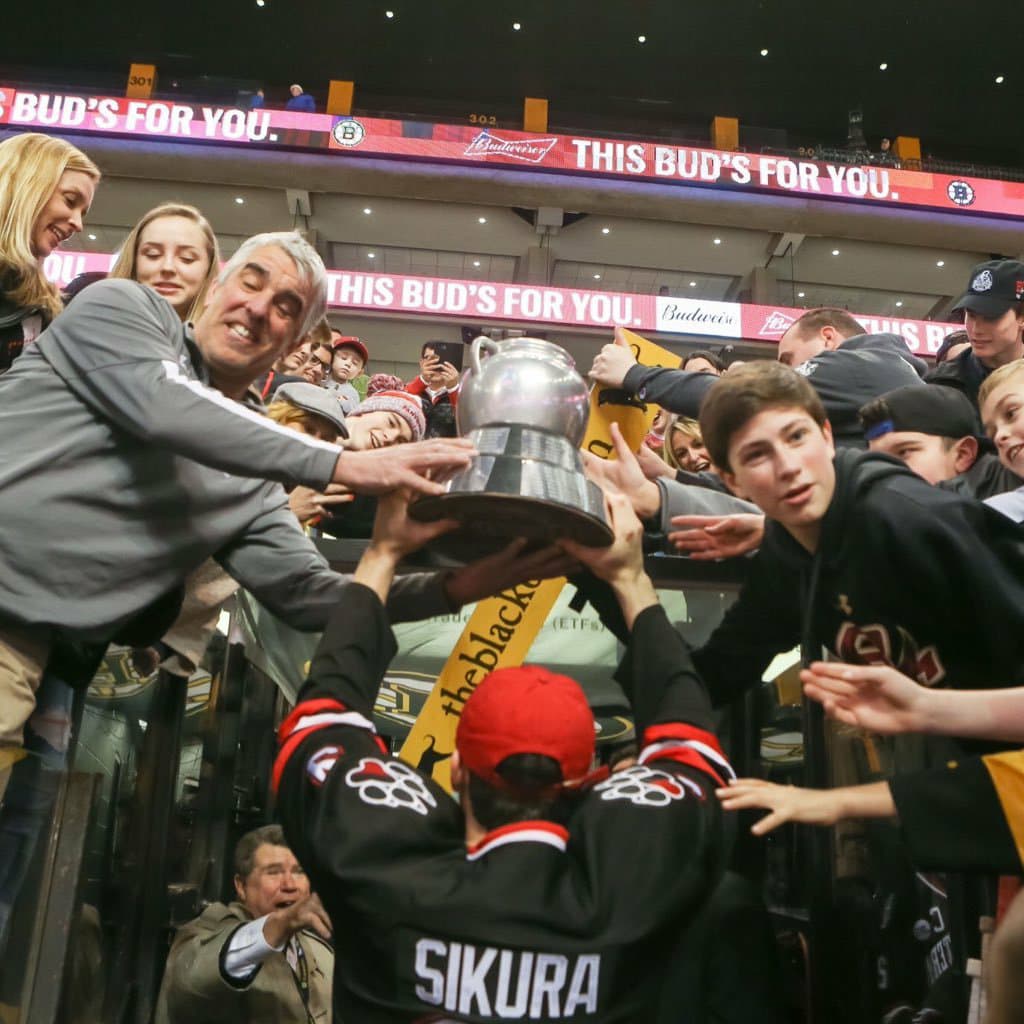 When it rains, it pours. Just one day after Northeastern received its first commitment of the new recruiting period, the Huskies received their second in…

Northeastern has received its first verbal commitment of the new recruiting period in the form of Grayson Badger, an ’04 right wing from Hyde Park,…

Northeastern has received a commitment from Joe Fleming, a 2003-born right shot defenseman from Wellesley, MA. Fleming has previously played in the Boston Jr Eagles…

Northeastern has its next goaltender. We are hearing that Evan Fear, who spent the last two season with Quinnipiac of the ECAC, has transferred to…