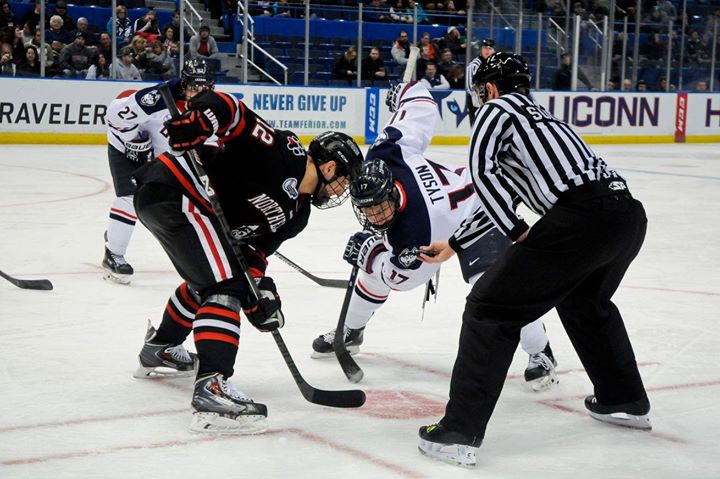 Fresh off their controversial 4-2 victory over Boston College on Monday, in a game that unfortunately did not count for anything in the league standings, the Northeastern Huskies now jump back into conference play for the final two weekends of the regular season. This weekend, NU will play a home-and-home with their fellow Huskies from the University of Connecticut. Puck drop is set for 7 PM Friday Night from the XL Center in Hartford before the teams come up to Boston for a 7:30 game on Saturday Night at Matthews Arena. Northeastern will be celebrating Senior Night on Saturday, where the 8-member senior class will be recognized for their four years of commitment to NU Hockey.

To put it simply, this weekend will likely decide whether Northeastern will be playing at home in the first round of the Hockey East playoffs. Despite their recent conference turnaround (11 points in their past 7 games) the Huskies still find themselves in 10th place in Hockey East, one point behind UConn and two points behind both New Hampshire and Merrimack. It’s certainly still possible for NU to pass all three of those teams and climb up to 7th, Merrimack and UNH each still have a series left against a top six team while NU controls their own destiny against UConn, but if NU ends this weekend with a split or worse and remains behind UConn their chances may evaporate. Three points is the minimum requirement this weekend, while a sweep would obviously be ideal.

The Connecticut Huskies have been a dangerous team this year despite having only 10 wins on the season, as they’ve picked up victories over BU, Lowell, Notre Dame, and Vermont. However, they come into Friday’s matchup with just one win in their last eight games and two wins since the calendar rolled over to 2017. Which leaves them as a skilled team desperate to get back on the right side of a scoreboard, a situation NU fans are all too familar with.

The Huskies, as always, are led by sophomore forwards Tage Thompson and Max Letunov, who have combined for 53 points on the season and are UConn’s top two leading scorers, as well as their team leaders in goals and assists, respectively. The UConn attack is very balanced throughout, however, with nine forwards scoring double-digit points on the season and Corey Ronan sitting on 9 points and looking to become the tenth. Their defense features 4 NHL draft picks, including Sabres pick Phillip Nyberg who was added to the roster over winter break and has four points in his first semester with the team, although he has not played since February 4th. In net, freshman Adam Huska and senior Rob Nichols have split duties and will likely both see action this weekend to continue the trend. Both goalies have been solid this season, with nearly identical .918 and .919 save percentages to go along with 2.53 and 2.76 GAA’s. Huska is a part of this year’s tremendous class of freshman goaltenders who have made an impact around Hockey East and around the country this season.

Ultimately, UConn is a team that can beat you on any day, but on most days they aren’t quite up to the challenge. Northeastern is undefeated against their fellow Huskies in school history, and they’ll need to keep that streak going this weekend to get into a top eight spot in Hockey East.