For an unprecedented third year in a row, the Northeastern Huskies are the Beanpot Champions. A school that in recent memory had just 4 Beanpots in 65 years alongside a heartbreaking 30 year drought has now nearly doubled that total in an unfathomable run of success.

In an exhilarating double-overtime performance against Boston University, it was Jordan Harris who scored the game winning goal on a powerplay late into the second overtime, the first full 20-minute overtime due to new NCAA regulations. Goaltender Craig Pantano saved 40 Terrier shots, including 11 in the overtime periods, and won the Eberly Award as the top goaltender in the tournament for his performance over both Mondays, including stonewalling Harvard for the win last week. Zach Solow was named Most Valuable Player after a goal in each game.

Somehow, though, as much as some might say the hero of the game was the overtime scorer, or the 40-save goalie, or the tournament MVP, or the captain on defense who came up big time and time again, the real reason the Huskies even got into that position was a freshman forward from just south of the city, Aidan McDonough.

It was all Terriers in the first, as they got on the board early when Jake Wise took his own shot out of Pantano’s pads and put it behind him, followed by a Trevor Zegras snipe of the puck over a screened Pantano. The Huskies had a few scoring chances late, but ended the first down 2-0 in a score consistent with the run of play all period.

The freshman helped open the Huskies’ scoring just 2:53 in the second when he found future Canucks teammate Tyler Madden in the high slot on a set faceoff play, who took a shot high over Ashton Abel to breathe life back into the Huskies. Under 3 minutes later it was McDonough doing it himself, as Ryan Shea centered him in the high slot before the freshman unloaded for the tying  goal past Abel.

We are tied at 2-2 thanks to goal from Aidan McDonough.

The Vancouver prospect notches his tenth goal of the season off some nice pressure in the offensive zone from the Huskies. #Canucks #HowlinHuskies #Beanpot pic.twitter.com/426YMaPxZ8

A few BU penalties later during a 5-on-3 Huskies advantage, Northeastern made BU pay for their mistakes. First McDonough centered Solow for a third snipe from the high slot off a beautiful quick one-touch pass, then before the last BU penalty expired,  Julian Kislin (who had a career day himself with 3 assists) fed the puck to Grant Jozefek in space, and Jozefek rifled a shot over Abel’s shoulder to put NU up 4-2 and send Abel to the bench for good.

We know what happened from there, with BU scoring an early third period goal from David Farrance and a late, astounding game tying effort from a whole host of Terriers that ended with Zegras potting a tying goal that sucked the life out of the NU faithful with a single second on the clock. That goal is a story itself, a symbol of the adversity that NU has faced so many times over the years when facing the Terriers in the Beanpot Tournament, and many fans were thinking “I’ve seen this story too many times” during the 30-year drought.  It’s a story that includes NHL progeny scoring overtime winners,  Patrick Brown scoring a game winner while sitting on the ice, and Cameron Voss making a call that we refuse to speak of to this day. But this isn’t that Northeastern; not anymore. There truly is a new breed born on Huntington Avenue, and with a power play late in the second overtime, McDonough got the puck one last time along the boards and passed it back up top to Harris, who skated towards the middle of the ice and made history.

This is Jim Madigan’s sixth Beanpot title of the seven Northeastern has won, certainly rendering Mad Dog worthy of the “Monday Night” moniker himself. It’s the third for the upperclassmen, including Shea, who quipped after the game that they should just let him keep the trophy at this point;  Matt Filipe, a senior who has been a stabilizing force among the forwards this year, and was forced to watch his final Beanpot game from the sidelines due to injury; Jozefek, who is thriving on that second power play unit these days and has 4 goals in his last 6 games; and the MVP Zach Solow, who is quite clearly in love with these fans and this school. 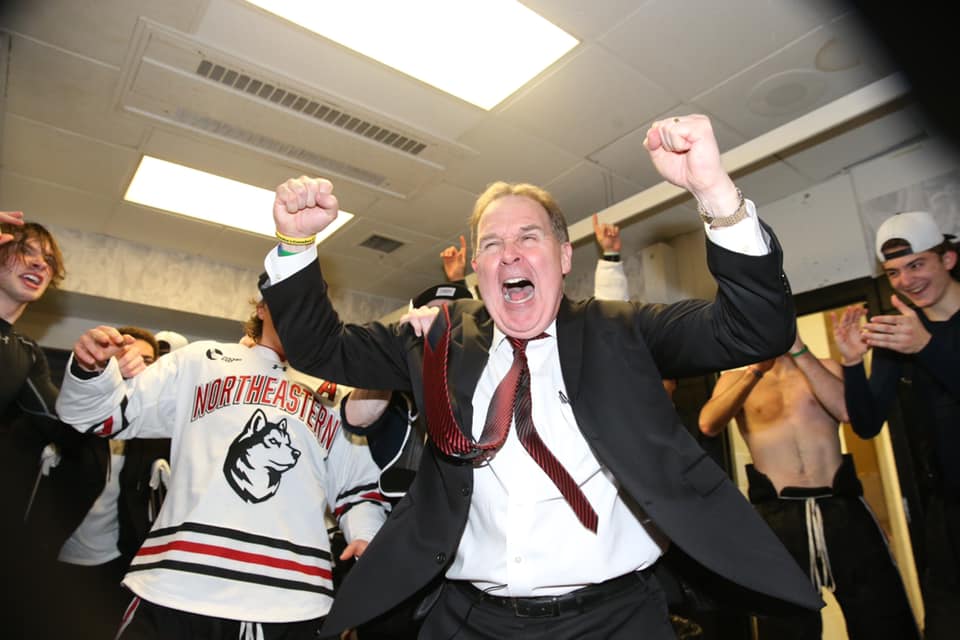 So, now what? Well, it’s trophy season, and the next goal for the Huskies is… qualifying for any other trophies. They enter a weekend series against UMass Lowell with the teams adjacent at 11 and 12 in the Pairwise, but perhaps more importantly, the Huskies are looking to dig themselves out of 9th in the Hockey East standings, a position that would see their season end if the standings were final. After that they see BC and BU each for a weekend series within the last three weeks, and some quick math would say NU needs to at least sweep Vermont and pick up three wins in those other six games to keep themselves in the running.

First is Lowell, led by Tyler Wall who will assuredly be a finalist for the Richter after finding his game again as a senior, saving a Primeau-esque .932 on the season. Offensively it’s a freshman charge that has Lowell set up for seasons to come, with Matt Brown, Carl Berglund, and Andre Lee among the team’s top four scorers alongside senior Kenny Hausinger. However Berglund is the only double digit goal scorer on the team and their 75 goals rank nearly last in the conference in goal scoring, beating out only lowly Vermont. So it’s safe to say Wall is carrying quite a bit of the load, and it will likely be a pair of low scoring affairs this weekend. NU continued to improve their otherworldly shooting percentage on Monday when they chased Abel, and the matchup of the Huskies high-quality-low-volume offense against top goalies Wall of UML and Spencer Knight of BC in the coming weeks is something I’ve been waiting months to see.