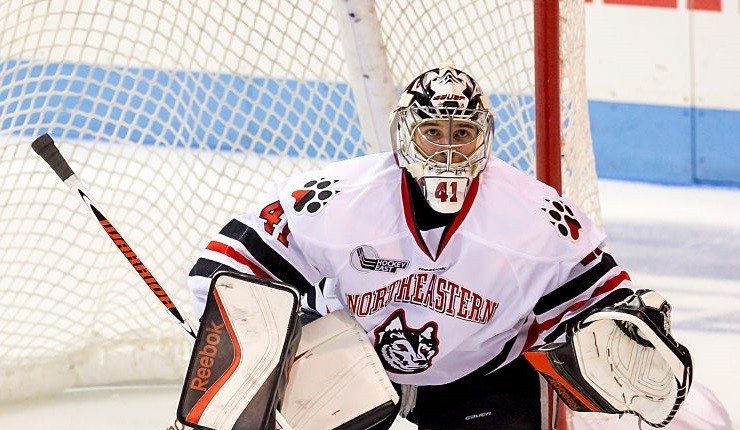 BOSTON, MA — Zach Aston-Reese scored a hat trick for the second time in as many games, Ryan Ruck made a career high 38 saves, and the Northeastern Huskies cruised to an 8-2 victory over the visiting Clarkson Golden Knights. It was the Huskies’ sixth straight out-of-conference victory, and they are unbeaten in non-Hockey East games since their 5-2 loss to Quinnipiac on October 8.

The Huskies scored 4 goals in the first 12 minutes of the game, including one in the first minute from Lincoln Griffin, who took an Adam Gaudette feed in tight and threw it under the glove of goaltender Jake Kielly. That goal was followed by tallies from Garret Cockerill scoring from the point, Dylan Sikura‘s one man rush on the powerplay, and Matt Filipe‘s tap in off a great cycle with Brendan Collier and Sam Kurker. Clarkson would get one back late in the first, with Nic Pierog capitalizing off a bad Ryan Shea turnover to cut the lead to 3.

WATCH: Sikura swiftly navigates into the attacking zone before notching his 11th of the year and a 3-0 Huskies lead #GoNU pic.twitter.com/O7iNEujoiq

The second period saw three more Northeastern goals, one by Gaudette and two special teams goals by Aston-Reese- one on the powerplay and one shorthanded. The shorthanded goal was an easy tap in after a beautiful saucer pass feed by Tanner Pond, converting a 3-on-1 rush. The Northeastern penalty kill was great all night, killing all three Clarkson penalties, including one full 5-on-3 after Jim Madigan took a bench minor in tandem with a John Stevens slash.

The third period saw only two goals, the first by Clarkson’s Perry D’Arrisso on a shorthanded rush. The puck was fed to him in the slot and deflected through Ruck’s pads for the score. The Huskies’ lone third period goal was Aston-Reese’s third of the night, a lovely one many rush where he just made multiple Clarkson players look silly. See the highlight below:

Ryan Ruck continued his strong recent play, saving a 38 of 40 shots, including all 6 on the powerplay that he faced. He made multiple quality saves, both in tight and when fighting traffic. He had some rebound issues throughout the game, but the Northeastern defense did well to clear the loose puck, particularly late in the game. Better teams may capitalize on those loose pucks, but Ruck and the defense did well to limit the damage.

INFOGRAPHIC: A hat trick, a career-high saves, and a career-high in points. Not a bad night for the Huskies#GoNU | #RedBlackOnePack pic.twitter.com/CLgVVSRTse

All in all, a strong showing by Northeastern. 8 goals is obviously great to see, and that was without the debut of Liam Pecararo. Holding a team to fewer goals than their average is good, and while allowing 40 shots is bad, allowing only 2 goals on those shots is great to see. The powerplay converted twice out of five chances. The Huskies did lose 6 more faceoffs than they won, but that is in line with a season-long trend. The Huskies are now at the .500 mark, standing 7-7-4, and will play on the road at Yale on January 3rd. As always, Go Huskies!