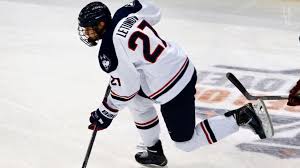 After enjoying their Thanksgiving break without any weekend games to play, the Northeastern Huskies will travel down to Hartford, CT on Tuesday to take on their blue cousins to the southwest, the Connecticut Huskies. Since UConn joined Hockey East back in 2014 Northeastern holds an immaculate 8-0 record against them (6-0 regular season), and have outscored them 40 goals to 8 in those 8 games.

UConn comes into the game tied for 6th in Hockey East with New Hampshire with 7 points earned in 10 games (3-6-1). Northeastern, on the other hand, sits in a tie for third with 10 points in only 7 games played (5-2-0). UConn holds two conference victories over Vermont (who NU also beat) and one over Maine (who NU plays in the second half). Their tie was against Boston University.

As a team, UConn’s performance has been lackluster overall. A 5-10-2 overall record fits them near the bottom of the PairWise for the season (T-47th), and they are averaging only 2.47 goals per game (49th in the nation), not a good sign for a program that historically struggles to score goals. They have shown some scoring potential, scoring four goals or more in five games (leading to four of their wins). Defensively, they allow 3 goals per game, 34th in the nation. Their powerplay clicks at an 18.67% (31st in NCAA), while their penalty kill succeeds only 76.1% of the time (52nd).

Looking at possession numbers, they actually have a positive overall Corsi Percentage (51.2%), just a tick under what Boston University has done this season. At even strength, UConn’s Corsi percentage sits at 49.9%, and at close scores (tied or one-goal lead), they fall to 49.5%. All of these possession numbers are worse than what Northeastern has put forth this year, indicating that the Huskies should have the possession advantage in the game.

UConn is led in scoring by junior Max Letunov (2-9-11), a gifted playmaker who is better at setting teammates up than finishing at the net himself. Senior Spencer Naas is one of their better goal scorers, with 5 this season after leading the team last year with 15. Defenseman Johnny Austin provides scoring touch from the blue line (1-9-10), while Karl El-Mir (2-8-10), Max Kalter (5 goals), and Alexander Payusov (6 goals) all help to balance the Huskies’ scoring attack. Naas, Letunov, and Austin are the leading shooters in terms of shots on goal.

In goal, UConn is led by New York Rangers draft pick Adam Huska, who replaces long-time starter Rob Nichols. In 17 games, Huska has compiled a .908 save percentage, markedly down from his .916 last season. However he is coming off of a game where he saved 21 of 22 shots against RIT, so his confidence will be high going into Tuesday night.

Final Thoughts: When looking at the matchup in terms of talent level, statistical advantages, and season performance, every category favors Northeastern and one would expect them to win this game handily. UConn may also be without Payusov, who has been nursing an injury for multiple weeks now. However, it is worth considering that Huska has the talent to steal a game any given night, and UConn played Saturday afternoon, so they may not be as rusty as Northeastern, who will be coming out of their Thanksgiving food comas to make the trip down. I still expect Northeastern to win. I expect Cayden Primeau to play in net as well for NU.