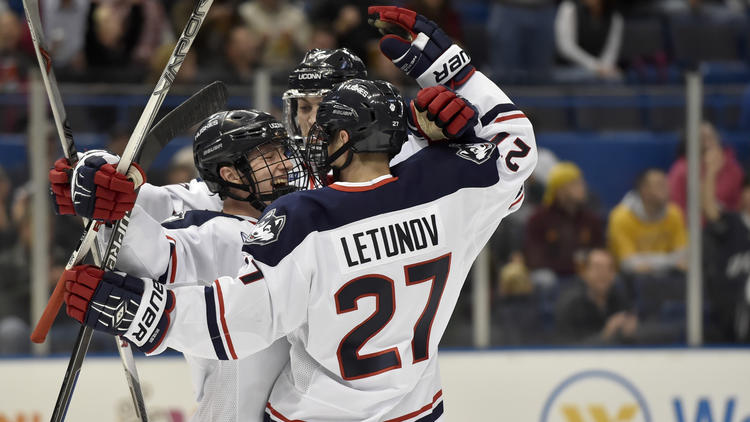 Playoffs: Swept by Vermont in Opening Round of Hockey East Playoffs

Hockey East, Year Two wasn’t much different than Year One for Mike Cavanaugh’s Connecticut Huskies. The club won just one more game in 2015-2016 compared with the previous season, and moved up to 8th from 9th in the conference standings. UConn continued to struggle for large swaths of the schedule, suffering through an 8-game losing streak early on in the season. They generally only grabbed wins against some of the weakest competition at the Division I level. Of the team’s 11 wins, 8 came against: Alabama-Huntsville, Brown, Maine, UNH (twice), and Arizona State (three times). That’s over 25% of the club’s wins coming against a team who competed at the DI level for the first time last season.

The record was underwhelming, but the goal for Connecticut hockey the last couple of years has been less about winning games and more about renovating a former Atlantic Hockey program and turning it into a perennial Hockey East contender. This was never going to happen overnight, but there were several positives from last season that indicate the Huskies are on their way.  The team’s other three wins consisted of a game against Boston University at home, and a weekend sweep of UMass-Lowell. The Huskies also hosted a Hockey East playoff series for the first time. Despite the series loss to Vermont, this and the Lowell and BU wins are important building blocks for a growing program program and a young roster.

Above all else, that young roster is the most meaningful takeaway from last season. Connecticut welcomed its first bona fide Hockey East recruiting class last fall and they did not disappoint. Three freshmen – Maxim Letunov, Tage Thompson, and Joseph Masonius – were were among the top 4 scorers for the Huskies over the course of the season. Letunov, a late pick-up after his admission to Boston University fell through, stepped in and immediately posted 40 points in his Hockey East debut campaign. A second round pick of the St. Louis Blues in 2014 whose rights now reside with the San Jose Sharks, Letunov promises to to be one of the best forwards in Hockey East once again this season. Thompson frequently drew headlines as well, as he posted 32 points in his first NCAA season. He was an assassin on the power play, scoring 13 of his 14 goals on the man advantage and leading the league in that category. Thompson’s season boosted his stock enough for the Blues to draft him 26th overall this past summer. Finally, Masonius posted 21 points and was a mainstay on the Connecticut blue line (playing in 34 games). He was drafted in the 6th round by Pittsburgh this past summer.

These three rising sophomores are the core that Connecticut hopes to build around in the coming years. The Huskies will need them, as there is still a long way to go for this program. The overall team stats are not surprising for an 8th place club, but do not paint a pretty picture. They scored just 2.44 goals per game (8th in Hockey East) and allowed 3.17 per game (9th). The power play was a little better than one would expect (7th, 19.7%), mostly thanks to Letunov and Thompson (the second and third-leading point-getters in the conference on the power play). The penalty kill was solid (6th, 81%), as was the goaltending from junior Rob Nichols (.911 save percentage). Most concerning, though, is the 45.4% overall Corsi For, which ranked 47th in the nation.

Cavanaugh’s program clearly has an uphill battle ahead of it, both in the long-term and short-term. This is especially the case offensively; while the Huskies return 76% of their 237 points and 77% of their 88 goals this is concerning because: A) 88 goals is not enough and B) 51% of that returning point total comes from Letunov, Thompson, and Masonius. There is just no scoring depth on this roster. Last year, just four players had more than 20 points: Letunov, Thompson, Masonius, and the graduated Shawn Pauly (7-14-21). Just two players had more than 10 goals (Letunov and Thompson).

On top of this, UConn also loses Patrick Kirtland (7-10-17) to graduation, as well as early departure defenseman Ryan Segalla (0-2-2, 21 games played, draft pick of the Pittsburgh Penguins but currently unsigned). The Huskies need help on both ends of the ice if they are to continue the slow trudge towards Hockey East contention. They need rising juniors Spencer Naas (9-5-14), Jesse Schwartz (3-8-11), and Corey Ronan (7-2-9) to shoulder additional scoring responsibilities. They need blueliners Miles Gendron (Ottawa Senators draft pick) and David Drake (Philadelphia Flyers draft pick) to step up defensively.

Fortunately for them, Cavanaugh has put together another solid recruiting class to help them. The headliner for Connecticut this fall is goaltender Adam Huska, who arrives via the Green Bay Gamblers of the USHL. Huska was the 2015-2016 USHL Goaltender of the Year after posting league-leading numbers in save percentage (.931) and GAA (1.82). A 7th round pick of the New York Rangers in 2015, Huska brings size to the UConn net (6′ 4″ and 205 pounds) and has been reported to have good quickness and reactions as well. He should compete for time immediately with the incumbent senior goalie Nichols and he is clearly the netminder of the future for UConn.

The offense will be boosted by the addition of three forwards. Alexandre Payusov arrives in Storrs by way of the Madison Capitals of the USHL. The 5′ 11″, 180 pound forward  posted 31 points in 57 games last season (17 goals, 14 assists). He is joined by Justin Howell, a 5′ 10″, 200 pound forward who posted 24 points (13 goals) in 55 games for the Des Moines Buccaneers of the USHL last year. Benjamin Freeman will bring a little more size, at 6′ 5″ and 205 pounds, and higher point totals (20 goals, 38 points) albeit for the Connecticut Jr. Rangers of the USPHL.

Connecticut also adds significant size on the blue line with Bryan Nelson (6′ 3″, 225 pounds) and Wyatt Newpower (6′ 4″, 200 pounds). Nelson, a former Harvard recruit, arrives afters spending time with both the West Kelowna Warriors (BCHL) and the Connecticut Junior Rangers (USPHL) a year ago. Newpower is a true freshman out of Minnesota. Neslon is not a huge threat to show up on the scoresheet (10 points in 45 games between both leagues), but Newpower should contribute after posting 20 points in 25 high school games as a senior. Regardless, both players will bring additional physicality to a UConn defense that now features just one blueliner under 6′ 2″.

The Ice Bus has a lot to be excited about this season, but Connecticut would need some surprising improvement from its returning roster and a repeat of last year’s freshmen class performance to truly make noise in the Hockey East standings. Neither is likely, so expect the Huskies to compete for home ice in first round of the conference playoffs and push for the seventh seed, especially if Huska catches fire and seizes the starting job.

Nearly a month exactly after Reegan Hiscock committed to Northeastern, the Huskies locked in their newest verbal commitment from Jack Pechar, a 2005-birth year forward…

Earlier this week, Northeastern received their latest commitment for the future in Reegan Hiscock, a 2004 birth year forward from Newfoundland, Canada. Hiscock is currently…