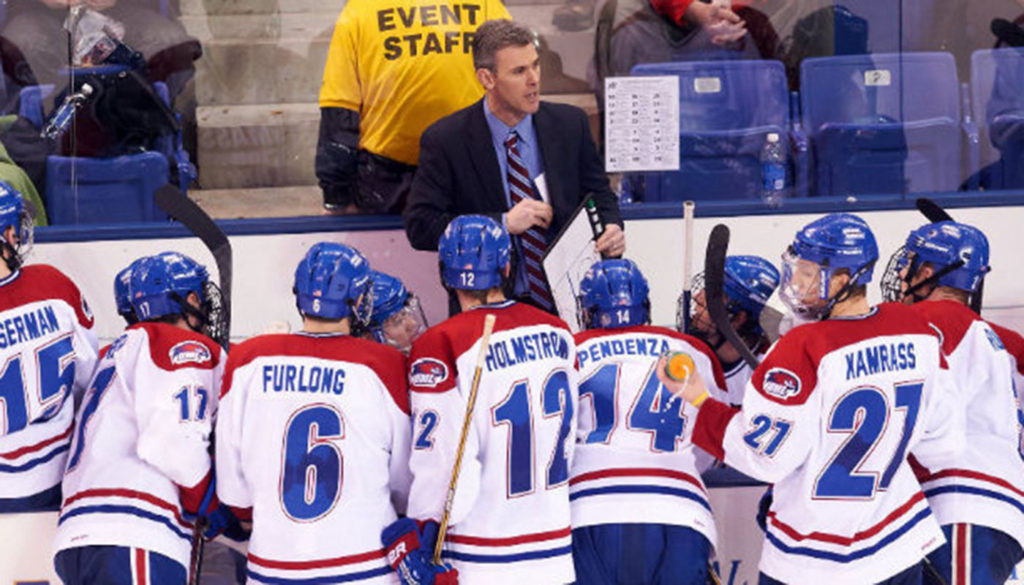 This weekend, Northeastern begins their 2017-18 conference schedule, beginning a stretch of seven games in a row against teams that could be in contention to make the NCAA Tournament in March. That slate starts with two games against the Riverhawks from UMass-Lowell, coached by hockey wizard Norm Bazin. Northeastern will actually play Lowell three times in this slate, with the third meeting coming November 11th as part of Hockey East’s new unbalanced schedule (thanks again, Notre Dame!)

A perennial powerhouse in the conference, Lowell has advanced to the last five Hockey East Championship Games, and have come out victorious in three of those matchups. One of their two losses was, of course, to Northeastern in 2016, completing the Huskies’ miraculous second half run. But this is a new season, and new blood is being infused into this budding rivalry.

Lowell So Far: This season, Lowell started off with perhaps the most shocking result of the season’s opening weekend- being swept by New Hampshire, a team picked almost universally to finish near the bottom of Hockey East. The Riverhawks followed that series with a third loss, this one against Nebraska-Omaha, and sat at 0-3 for the first time in Bazin’s time at Lowell. After that third loss, they made a switch in net, from incumbent Tyler Wall to sophomore Christoffer Hernberg, and Hernberg has taken the job by storm, leading the Riverhawks to three straight victories, including one shutout against St. Lawrence. Hernberg currently sits at a spectacular, yet unsustainable, .971 save percentage, and I would expect him to be the lead netminder for the Riverhawks come Friday night.

Outside of the goalie, Lowell has a number of returning faces that Hockey East fans will recognize from years’ past. Gone are the longtime studs Joe Gambardella, Dylan Zink, Michael Kapla, and CJ Smith. In their stead, Kenny Hausinger leads Lowell in scoring, with 8 points (5 goals) in 6 games. Ryan Lohin is tied with him at 8 points, with Lohin’s all coming via assists. Tyler Mueller is the top scoring defenseman with 6 points (2 goals), and seniors John Edwardh (5 points), Zach Kamrass (4 points), and Chris Forney (4) points held spread out the Riverhawks’ offensive threats. Sophomore Mattias Goransson has had a slow start to the year on the score sheet (1 goal, 1 assist), but has helped drive the Riverhawks’ offense with his 15 shots from the blue line, second highest on the team. Last season, Goransson tied Northeastern’s own Jeremy Davies as the top scoring freshman defenseman in Hockey East.

Looking at the team performance early in the season runs the risk of over-analyzing a small sample size, but we are going to do it anyway. UMass-Lowell has long been known as a top possession team not just in Hockey East, but in the NCAA as a whole. This season, their Corsi % sits at 51.6%, still above average, but only placing them 19th in the country. Northeastern, by comparison, is 5th, with a 57.5% Corsi, so this should be an excellent matchup in terms of offense and puck control.

Traditionally excellent at shot suppression, Lowell has allowed 169 shots in 6 games this year, just over 28 shots per game. By contrast, Northeastern has allowed 128 shots in 5 games, or just shy of 26 shots per game. Lowell has been shooting 12.1% on the young season, slightly above the national average and just behind Northeastern’s 12.7%. Their powerplay, which has historically been a strength for them, is clicking at 20% (Northeastern’s is at 25%), and their penalty kill is successful 84% of the time (Northeastern’s is at 70.6%). Just looking at those numbers, it is reasonable to once again expect special teams to play a large role in determining the outcomes of these games.

Final Thoughts: These games are vital for Northeastern as they look to avoid a poor start in conference play for the fourth year in a row. Once again, however, the schedule-makers have dealt Northeastern a brutal opening slate of games- Lowell, BU, Vermont, and Boston College all on the docket for the near-future, comprising four of the projected top 5 non-NU teams in the conference. It would be *huge* in the long run if Northeastern could split with Lowell this weekend, and have some points already in hand going into the teeth of conference play.

Last weekend we saw the collapse of the Huskies in both games lead to their demise, blowing third period leads in both games. After his strong start Saturday against Quinnipiac, I would expect Ryan Ruck to start Friday night against Lowell. Saturday is more uncertain- Coach Madigan could opt to play Cayden Primeau in the hopes of building his confidence back up, or he could ride Ruck for a while, trusting Ruck’s experience even though his performance over the last year-plus has been sub-par. Either way, I expect the teams to be matched up well- since Madigan and Bazin took over their respective Alma Maters, the series between the teams sits at 7 wins for Lowell, 5 for Northeastern, and 3 ties. It should be a good weekend of hockey ahead.