BOSTON, MA – The Northeastern Huskies wrap up their out-of-conference, non-Beanpot slate on Tuesday against the Yale Bulldogs. Northeastern will be making its first trip to Ingalls Rink in New Haven since 1995, but the team did host Yale at Matthews Arena in January of 2015, a 3-2 Huskies win.

The 2013 National Champions have had an underwhelming first half of the season. Yale is just 4-6-2 and 2-5-1 in ECAC play. Offense hasn’t been the major issue; the Bulldogs are averaging 3.00 goals per game, settling into the middle of the pack at 29th in the nation. Senior forward John Hayden has led the way with 10 goals and 1.33 points per game. He’s been averaging over 5 shots per game as well. Sophomore forward Joe Snively and junior forward Ryan Hitchcock have also made significant contributions, chipping in 1.33 and 1.17 points per game respectively. On the blue line, Adam Larkin has chipped in with 3 goals and 0.75 points per game.

Yale’s special teams have been solid if unspectacular – both the power play and penalty kill sit at 19th in the nation at 20% and 85.2% respectively. The defense, however, has been a different story. Yale is surrendering 3.5 goals per game, 50th among Division I teams. This is a little surprising when you look at the underlying numbers. The Bulldogs are being outscored 42-36, but are outshooting their opponents 421-332. In fact, Yale has been outshot in just 2 of its 11 games this year and currently sports a 58.3 CF%, good for 2nd in the nation behind Penn State’s ridiculous 62.8%.

If you’ve read this blog for the past few months, you probably know where this is going. Much like the Huskies, Yale’s struggles appear to be primarily goaltending. Senior netminder Patrick Spano has gotten a majority of the time, playing in 10 games but posting an .895 save percentage. Sam Tucker has played in 4 games (176 minutes) and somehow has managed to be even worse, putting up an .844 save percentage.

On paper, this is a game Northeastern should win. The Big 3 of Dylan Sikura, Adam Gaudette, and Hobey Baker hopeful Zach Aston-Reese should be primed to put up strong numbers against Spano and/or Tucker. Yale’s offense, while nothing to sneeze at, lacks depth (Hayden, Snively, Hitchcock, and Larkin are the only players with more than 0.55 points per game). It’s the kind of offense that NU goalie Ryan Ruck can handle. There is, however, plenty of potential for this to go awry considering Yale’s peripheral numbers.

Regardless, this is a game Northeastern has to win. At this stage of the season, the Huskies have time to right the ship for the national tournament, but they cannot let many more opportunities slip by. They need to take care of business Tuesday night and not get caught looking ahead to the resumption of Hockey East play next weekend. 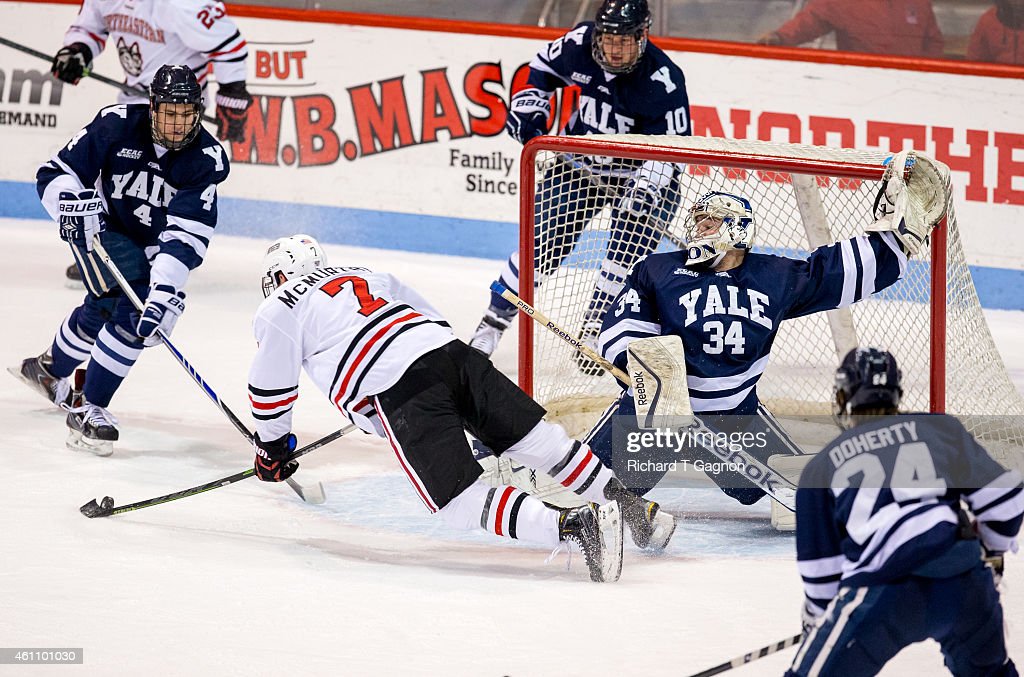